Written by Vets National Advocates on May 12, 2015. Posted in Uncategorized 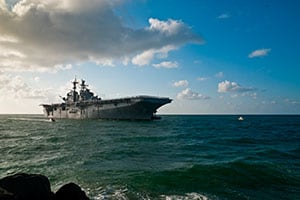 Some Navy veterans may soon have an easier time getting disability benefits from the U.S. Department of Veterans Affairs (VA).

Under a proposed law, soldiers who served aboard Navy vessels in Vietnam would no longer be ineligible for VA compensation for Agent Orange-related illnesses, according to a written statement from Senators Kirsten Gillibrand (D-NY) and Steve Daines (R-MT).

In March, both senators introduced the bill, the Blue Water Navy Vietnam Veterans Act of 2015, which would extend the current VA definition of who is presumed to have contracted such illnesses during military service.

The legislation includes veterans who were in the territorial seas of Vietnam while serving in the military and became ill due to exposure to herbicides.

These former soldiers are known as Blue Water Veterans and can have a difficult time getting compensation from the VA for such exposure.

The government agency states online that veterans who were in the open sea in Vietnam can only get disability compensation by proving that they went ashore there or entered local waters in the Southeast Asian country.

[Blue Water Veterans] must show on a factual basis that they were exposed to herbicides during military service in order to receive disability compensation for diseases related to Agent Orange exposure, the VA says online.

Former American foot soldiers from the Vietnam War dont face as daunting a burden of proof. But the VA only considers certain disease to be related to Agent Orange exposure.

Has the VA Denied Your Disability Benefits?

Vets National Advocates can fight for you. But you have to take the first step and contact us.

Our trained advocates can help you get through the VAs complex appeals process. One of our advocates can even help you explain your claim to the Board of Veterans Appeals if necessary.