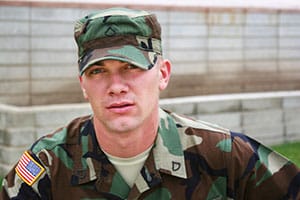 Post-traumatic stress disorder (PTSD) affects hundreds of thousands of veterans every year. To help raise awareness and understanding for this often debilitating condition, Congress, through the efforts of the Department of Veterans Affairs (VA) and The National Center for PTSD, named June 27 PTSD Awareness Day.

The efforts of this important day also expand throughout June for PTSD Awareness Month.

Vets National Advocates knows the difficulties that veterans suffering from PTSD experience and we work to help them in every way we can. For those whose disability benefits have been denied, our experienced team can work with them to appeal the denial and get them the help they need.

PTSD is one of the most common service-related disabilities that affects veterans from all generations. According to the VA, 535,000 veterans sought care at a VA facility for PTSD during 2014.

After a traumatic life event, many people experience stress-related reactions, however, if those reactions dont go away over time and disrupt your life, you may be suffering from PTSD.

Some of the symptoms include having nightmares and flashbacks in which you continually relive the traumatic event; avoiding situations that remind you of the event; and often becoming paranoid, always on the lookout for danger.

For many veterans, the realities of war and combat trigger these emotions after returning home.

According to the National Center for PTSD, the number of veterans suffering from PTSD varies by service era:

The purpose of PTSD Awareness Day and Month is to raise awareness about PTSD and the available treatments so that those affected can get the help they need.

If veterans are struggling to receive the disability benefits they need, our advocates can help. With years of experience working with the VA, we know the complexities of the organization and can guide veterans through the appeals process so that they can get the benefits they deserve.