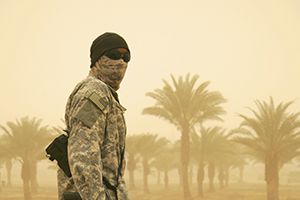 According to a recent report, troops who worked in burn pits and who were exposed to multiple dust storms during service in Iraq and Afghanistan have an increased risk for developing respiratory conditions other than allergies.

For many veterans, access to disability benefits is an important necessity. However, the application process can often be a complicated one. If you are denied, it only becomes more complex. Our team of knowledgeable veterans disability advocates can help you appeal a denied claim to get the benefits you need.

According to the data collected from the Veterans Affairs Airborne Hazards and Open Burn Pit Registry, military men and women frequently exposed to dust and burn pits may have a higher likelihood of developing respiratory illnesses like emphysema and asthma as well as rarer lung disorders like constrictive bronchitis and idiopathic pulmonary fibrosis.

The Burn Pit Registry was created in April 2014 to monitor potential health problems that can develop from exposure to airborne environmental hazards. As of December 31, 2014, almost 46,000 veterans had created accounts with the registry.

About 60 percent also completed the voluntary online self-assessment questionnaire as part of the registration that provides insight into their current health status and past exposures.

The recent findings reported by the Department of Veterans Affairs (VA) were based on questionnaires answered by more than 28,000 veterans. Below are some of the key findings from an analysis of the report:

While this report may provide important insight into the types of conditions that may affect younger generations of troops, many caution that report does not show a direct correlation between burn pits and these diseases more research and data is necessary.