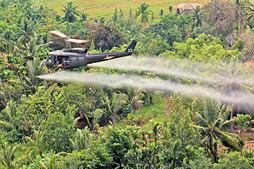 During the Vietnam War, the U.S. military sprayed approximately 20 million gallons of chemical herbicides in and around Vietnam. During this time, thousands of military men and women were exposed to Agent Orange or Herbicide Orange.

By 1993, decades after the war had ended, the VA had received nearly 40,000 disability claims from Vietnam veterans who believed their disability was linked to Agent Orange exposure.

As a result of these claims, the VA and federal law now presume that certain diseases are a result of exposure to herbicides. Victims who believe their disease or condition was caused by Agent Orange exposure may file a disability claim.

The VA has recognized that certain cancers and health problems are the result of exposure to Agent Orange and other herbicides. By creating this list, the VA streamlined disability claims for vets exposed to these dangerous chemicals.

The following are presumptive diseases the VA associates with Agent Orange veterans:

In 2008, the Institute of Medicine released a report which linked Agent Orange to Ischemic Heart Disease among veterans of the Vietnam War. By 2010, the VA began listing ischemic heart disease as a presumptive disease, meaning that most vets would automatically be entitled to compensation if they suffered from the disease after being exposed to the dangerous herbicide.

Additionally, the VA announced that some veterans and surviving spouses may be entitled to retroactive benefits. Anyone who was previously denied benefits for ischemic heart disease should consider appealing their claim. Surviving spouses, dependent children and dependent parents may also be eligible for compensation if their loved one passed away as a result of ischemic heart disease caused by Agent Orange exposure.

Children who have certain birth defects and are biological children of veterans who have qualifying service in Vietnam or Korea may also be eligible for a range of VA benefits. Eligibility varies based on the birth defect, however, the defect must have resulted in a permanent or physical disability.

At Vets National Advocates we understand how devastating the consequences of Agent Orange have been for veterans and their families. We are dedicated to helping our nation’s veterans get the benefits they deserve.

Disabled from the devastating effects of Agent Orange? You deserve the benefits you’ve earned.
Get help today by calling 1 (877) 777-4021 or contacting us online now.