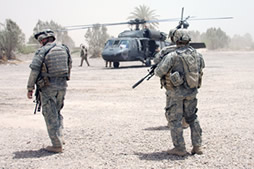 After the war ended, many returning servicemembers began reporting illnesses following their return from action overseas. The phenomenon eventually became known as Gulf War Illness or Gulf War Syndrome. It is estimated that 250,000 veterans who served in the 1991 war suffer from an illness that causes an array of acute and chronic symptoms.

The illnesses associated with Gulf War Syndrome have been linked back to some of the environmental and chemical hazards service members were exposed to in the Gulf.

If you or someone you love was denied disability benefits for their Gulf War illness, Vets National Advocates is here to help.

A number of infectious diseases are related to military service during the Gulf War, including malaria, Campylobacter Jejuni, Brucellosis and Shigella.

Gulf War syndrome may also be identified through several symptoms and conditions, including:

Additionally, chronic multi-symptom illness is linked to Gulf War syndrome; this condition causes long-term, severe fatigue that is not alleviated by rest.

There is no direct cause of Gulf War syndrome, however, the many hazards veterans were exposed to during operations Desert Storm and Desert Shield are likely the cause of this illness.

Some hazards Gulf War veterans were exposed to include:

The VA offers a free Gulf War Registry health exam for anyone who believes they may have been exposed to these dangers and could have suffered a long-term health problem.

According to the VA, certain chronic, unexplained symptoms experienced by a veteran for six months or more may be related to their service in the Gulf War. If you or a loved one is seeking disability compensation after serving the Gulf War, we are your advocates.

You shouldn’t suffer without the benefits you’ve earned. Helping Veterans, It’s What We Do.
Contact us at 1 (877) 777-4021 to learn more about your rights or fill our contact form to connect with us online.