Hundreds Show Up to Funeral of Veteran Who Had No Family 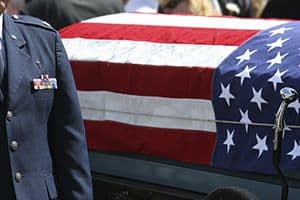 Hundreds of people show up to honor a Navy veteran who served in Vietnam and died on July 29th without any family to claim his remains or plan his funeral.

Don Kaas, a Vietnam veteran, passed away at age 66 in July at a VA hospital. Despite their efforts, the hospital could not locate any family for Kaas, a former sailor. Very little is known about him; he served on a Navy submarine as a machinist during the Vietnam War, and had moved to Kentucky because of his love of horses.

After a few weeks, no one had claimed Kaass remains, so a Lancaster funeral home owner, Shane Young, stepped in. Young was made aware of the situation by a minister at the church Kaas had attended. Young took it upon himself to investigate what benefits Kaas was entitled to, and posted information about services for Kaas on Facebook. He hoped that the post would encourage a few people to attend the services and pay respects.

The response to his post quickly snowballed, attracting the attention of an overwhelming number of people in the small community. We knew something special was happening, said Young. The Facebook post was made at 6 p.m., and by the following morning, Young started receiving calls from several organizations who wished to help.

Approximately 800 people attended Kaass funeral and most of them never met him. With the help of local veterans organizations, Kaas was provided with a full military funeral.

The Patriot Guard Riders led a 200-man strong procession to the cemetery. Many people offered donations to cover the expenses for Kaass funeral, but Young declined; instead, he asked that donations be made to local and national veterans organizations.

Vets National Advocates has created an extensive online resource center, to help veterans find available resources, which may be hard to find. It is not necessary to hire a disability benefits lawyer in order to appeal your veterans disability benefits denial. Contact Matter Veterans Advocates for the help you deserve for years, we have been proudly helping veterans work through the appeals process.